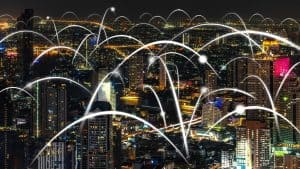 5G and software-defined networking together promise to make the real-time digital factory a working reality.

The combination of 5G and software-defined networking is set to revolutionize the industrial space with applications that only previously could be imagined – a “Cambrian explosion” of new ideas. “By 2025, more than three-quarters of all the data that’s being created will be created out towards the edge instead of in centralized data centers,” predicts Nick McKeown, senior vice president and general manager of the network and edge group at Intel Corporation. To support that, 5G and software-defined networks will enable the lightning-fast movement of information between edge devices and centralized systems – important as AI-based inference systems are brought online.

McKeown articulated this vision in a Q&A with MIT Technology Review, in which he connected the dots between 5G and software-defined networking, which promises to make the real-time digital factory a working reality. With the growth of 5G infrastructure, “we can start using it for applications we would not have previously thought suitable for a cellular technology,” he explains. “For example, if you want to control a robot arm in real time, you need to have a cable, a wire, an ethernet cable. You really don’t want a wire trailing around on the floor for other robots to trip over. You’d really like it to be a wireless link. 5G, in particular private 5G, provides a low-latency wireless link to manage robotic environments, he says.

Software-defined networking and the intelligence edge

Such powerful network delivery over wireless networks will boost intelligent edge computing. “We’re placing that data and the compute close to each other, where they’re generated and consumed at the edge,” says McKeown. “While it would be tempting to take data that we produce from cameras at the edge and move it all the way up into the cloud, that’s often not the right thing to do – it may take too long, or it may be just too expensive.”

The ability to process real-time data from edge devices in production settings is enhanced through 5G-enabled networks. This builds on having “higher data rates between whatever it is that’s gathering the data – cameras, sensors – and very tight control in terms of low latency back to the actuators. So, if you’re moving a robot, determining how a robot arm moves, you may only have one or two milliseconds in which to make a decision. If you combine that low latency, that high data rate, and that privacy, then you end up with a solution which is almost self-contained at the edge.”

For example, picture an environment in which AI-based computer vision scans cars coming off the factory floor, McKeown illustrates. “If a robotic welder is welding the frame of a car and is doing many, many welds, clearly you need those to be done quickly and with high quality. In the past, it required a lot of manual intervention and manual checking to make sure that those welds were of sufficient quality. Now, we can have a camera that is watching that welder in order to look at the quality of the weld, and in real time be able to react and fix a weld, or bring in a human to be able to check and then to fix it.” AI inference would be employed “as a way of understanding what a good weld looks like through training, and then through inference very, very quickly identifying that problem.”

In industrial settings where there’s more analysis happening at the edge, having greater observability into the network allows for fine timescale responses to mechanical errors and broken equipment, McKeown points out. “Corrective action could be something as mundane as a broken link, a broken piece of equipment, but it could actually be a functional incorrectness in the software that is controlling it.”

Mon May 23 , 2022
Researchers have proposed a novel system inspired by the neuromodulation of the brain, referred to as a ‘stashing system,’ that requires less energy consumption. The research group led by Professor Kyung Min Kim from the Department of Materials Science and Engineering has developed a technology that can efficiently handle mathematical […]