In a lengthy speech at Stanford University, located in the heart of tech-heavy Silicon Valley, the former president spoke about the ways that tech platforms have helped to divide the public, spread misinformation, and erode trust in democratic institutions, leading to the rise of autocrats such as Russian leader Vladimir Putin and unnecessary deaths from the coronavirus.

“People are dying” because of disinformation on social media services, he said. Companies, he said, are not being transparent with the public about how their algorithms — the software they use to spread content on their services — work.

“Algorithms have evolved to the point that no one on the outside of these companies can accurately predict what they’ll do … and sometimes the people who built them aren’t sure … That’s a problem,” he added.

Elon Musk would open up Twitter’s algorithms. Regulators may beat him to it.

In his speech, Obama said that when he was president, he didn’t realize “how susceptible we had become to lies and conspiracy theories, despite having spent years being a target of disinformation myself,” saying he still harbors regret to this day. Disinformation refers to a coordinated campaign by political leaders, corporations, or other figures to spread harmful falsehoods and misleading narratives.

Despite keeping a relatively low public profile during his post-presidency, the former president in recent months has started to turn disinformation into a signature issue for his public life after office, embarking on a campaign to warn the public about the harm caused by falsehoods online and the social media algorithms that spread them.

Disinformation emerged as a major issue during the 2016 presidential election. Reports surfaced about Macedonian teenagers pushing out sensational fake news on online services such as Facebook, along with stories that Russia was attempting to tilt the election toward Trump.

It was around this time that Obama pulled Facebook chief executive Mark Zuckerberg aside to issue a private warning about the scourge of disinformation and fake news at a conference in Lima, Peru, The Washington Post reported.

The following year, Facebook, YouTube and Twitter revealed the results of internal investigations showing that Russian operatives circulated misleading and polarizing narratives to millions of Americans in the run-up to the 2016 contest.

Russia never stopped trying to influence the U.S. political landscape, but during the Trump years, Silicon Valley companies got savvier about cutting off disinformation operations on their services, even as a disinformation-for-hire industry proliferated around the world.

Tech companies’ efforts to fight disinformation and other social ills have led to accusations from conservatives, including former president Donald Trump, that they were censoring free speech. The attacks have caused the companies to be more cautious about what they remove, and in the case of Facebook, to allow content from people on the right even when it broke the rules, according to reporting in The Post and other outlets.

During the 2018 midterms, the coronavirus pandemic and the 2020 presidential election, domestic sources of online falsehoods — and the role it played in causing societal polarization — became an even bigger threat to democracy than efforts by foreign powers, say researchers and experts.

Anti-vaccine activists and other extremists twisted basic facts about public health during the pandemic. Supporters of Trump, backed by online supporters and powerful influencers, pushed the falsehood that the election was stolen. That campaign helped fuel the Jan. 6 insurrection last year.

But Obama has kept relatively quiet on these issues and others — until now.

Speeches have been relatively rare from Obama, who was lauded for his oratory skills as president, since he left the White House.

During the elections that followed his presidency, he urged voters to participate in the effort to defeat Trump and elect Joe Biden, who had served as his Vice President.

For the most part, Obama has used social media to highlight the issues that he wants citizens in the country he presided over for eight years to focus on most.

But on Thursday, Obama provided some insight into why he decided to speak out on disinformation now.

“If we do nothing, I am convinced that the trends we are seeing will get worse,” Obama said, describing how new technologies can make disinformation more sophisticated. “Without some standards, the implications of this technology for our elections, for our legal system, for our democracy, for rules of evidence, for our entire social order, are frightening and profound.”

In his speech, Obama connected Russia’s war in Ukraine and the rise of autocrats around the world to public skepticism of democratic institutions fueled in part by the splintering of information and audiences online.

He also talked extensively about how the design and features of technology services can be manipulated too easily.

“All we see is a constant feed of content, where useful, factual information and happy diversions flow alongside lies, conspiracy theories, junk science, quackery, racist tracts and misogynist screeds,” he said.

But he offered both hope and solutions, arguing that the United States needs to create regulations for the tech industry and that the companies should be required to be more transparent about their processes for making decisions about what content is surfaced and how they spread it. He said it was possible to do so while protecting free speech, and without causing companies to reveal proprietary information.

He said the current predicament could be changed, but not without strong and immediate action from lawmakers, tech companies and the public.

“Very specific choices” by tech companies, he said, “intentionally or not have made democracies more vulnerable.”

Wed Apr 27 , 2022
This story was updated on Monday, April 25, at 11:12 a.m. PT to include a hyperlink to Obama’s full remarks of the Apr. 21 speech he delivered at Stanford. During a speech at Stanford University on Thursday, former U.S. President Barack Obama presented his audience with a stark choice: “Do […] 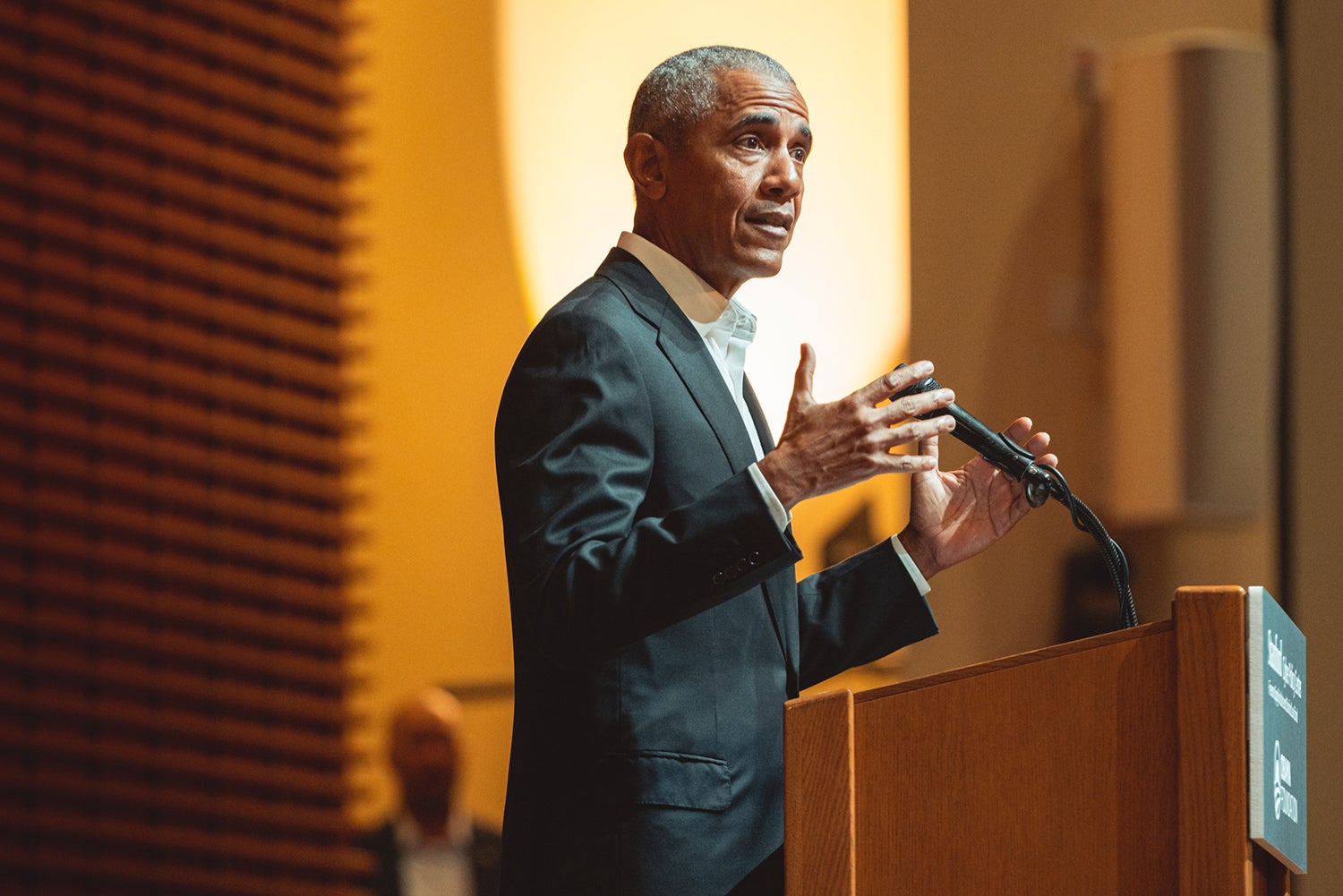