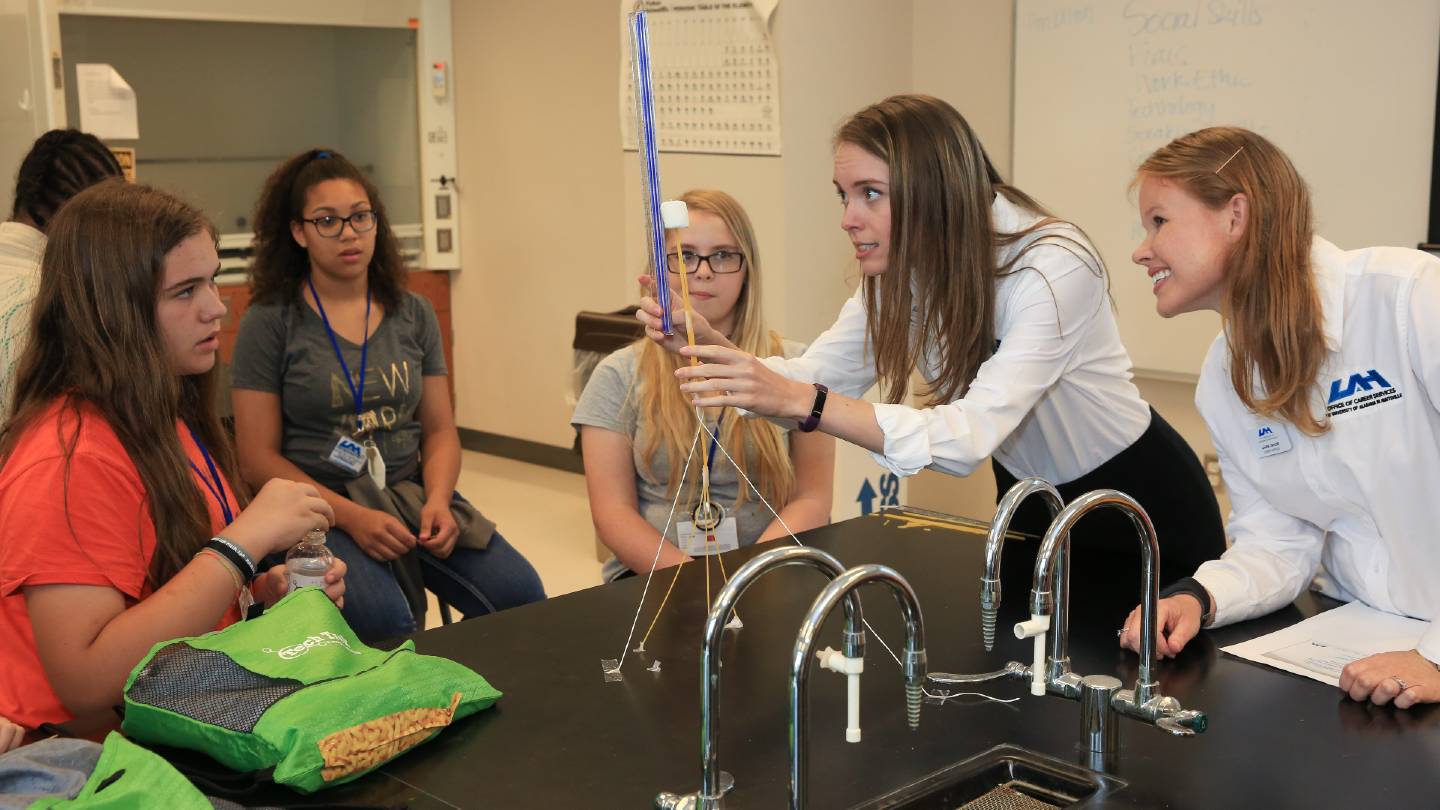 UAH is hosting Tech Trek again this year. The weeklong residential camp promotes interest in the science, technology, engineering and math (STEM) fields among eighth-grade girls. These photos were from a previous year.

After a two-year hiatus due to the pandemic, The University of Alabama in Huntsville (UAH), a part of The University of Alabama System, is once more hosting Tech Trek, an event designed to raise awareness and interest in STEM fields for rising eighth grade girls from across the state of Alabama. This year’s version of the program will mark the seventh time UAH has hosted the weeklong residential camp. 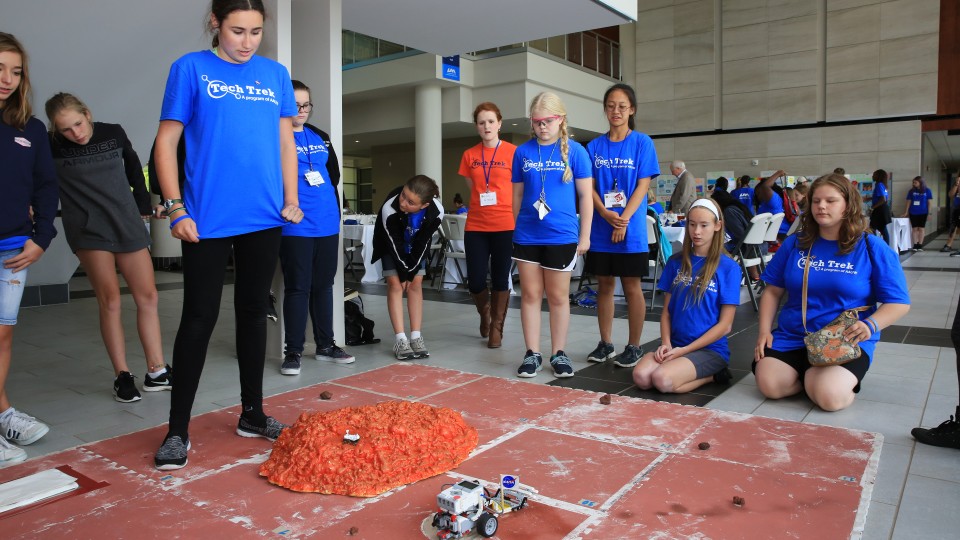 A study by the National Science Foundation, “Why so Few? Women in Science, Technology, Engineering and Mathematics,” revealed that eighth grade is the time when most school-age girls tend to fall away from STEM as an academic path. The American Association of University Women (AAUW) worked to reverse that trend by founding Tech Trek in 1998, which local advocate Dr. Rhonda Gaede, an associate professor of electrical and computer engineering and UAH Tech Trek Camp Director, brought to the University in 2014.

The idea was to invite rising eighth grade girls across the state to experiential summer camps that immerse them in the wonders of science and technology, all led by successful women scientists, engineers and professionals. A total of 64 girls from 24 Alabama counties are participating this week on the UAH campus from June 12 to June 18.

“The seventh camp was put off for two years because of COVID,” Dr. Gaede explains. “We didn’t feel a virtual camp would give the girls the same experience. We wanted them to be living and working together, with a lot of diversity along as many different dimensions as we could get. Leaders, followers, rural, urban, different ethnicities, so they could learn there are people out there who are different from them. Also, to show that we all have gifts we are sharing when we put them all together.” 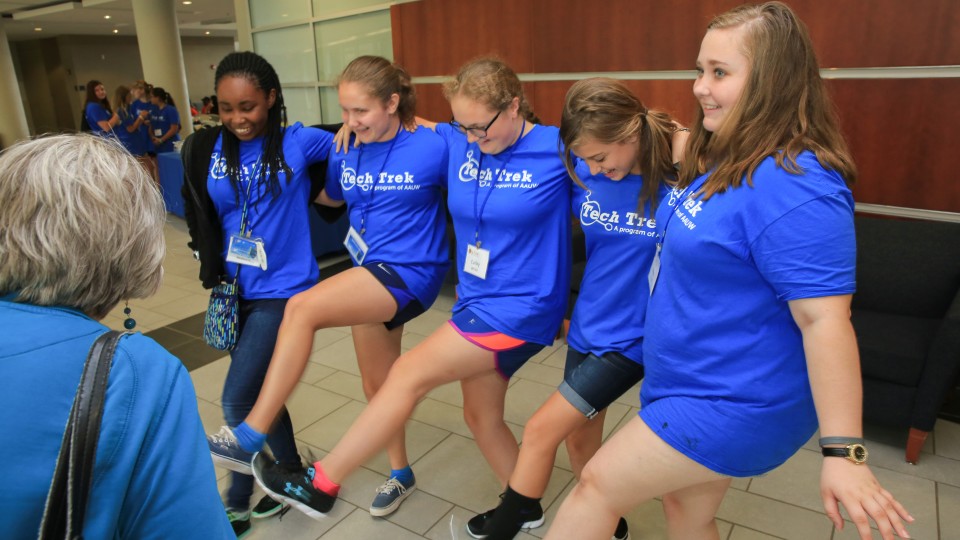 The girls are nominated by their teachers from counties all over Alabama. The camp features intensive hands-on experiments and activities that promote interest in the science, technology, engineering and math (STEM) fields. “The girls are nominated by their seventh-grade math and science teachers,” Dr. Gaede says. “We were concerned about turnout, because we had been away for two years because of COVID and teacher turnover is high. But we had a higher nomination rate than before! We had around 160 nominated and 140 applied.”

“Professional Woman’s Night will be held at Dynetics this year, so the girls can talk to them about their stories,” says Dr. Gaede. “It’s like that old saying, ‘if you can see one, you can be one.’ The first day we identify STEM pioneers, like Madam Curie. Then throughout the week the campers will research these people and later present a skit or a chat or a rap about what they learned. The Friday expo features all the girls presenting on their core projects.”

One special treat for participants will be visiting the U.S. Space and Rocket Center, where the campers will tour the exhibits and even launch their own rockets. Most importantly, the attendees will be taking part in a new activity that will help them visualize their futures in STEM.

“We have a visioning activity where we are going to have them write letters to their future selves about all the things they are doing now,” says Dr. Gaede. “We are going to send these off with a QR code that will enable them to follow-up at a later date.” This communication could prove pivotal to changing the lives of the campers for years to come. “One girl says that she knew ever since Tech Trek that she was coming to UAH,” Dr. Gaede notes. “And for the first time ever we are going to have a counselor who was a former camper!”

Camp workshops will emphasize vital fields of study that are especially relevant to today’s STEM challenges and needs.

“Some of the computing fields are the areas in which women are most underrepresented,” Dr. Gaede says. “And today we are more reliant on computer technology than ever. This year the core experiences will include things like MIT App Inventor and cybersecurity. Washington DC is no. 1 in the nation for cybersecurity threats, and I understand Huntsville is no. 2,” she points out. “So Huntsville is kind of all cyber, all the time. We are also doing things with energy – we called it Solar Sisters the last time – and NASA robotics. Other camps around the country are very jealous of the things we have access to here!”

Research shows that girls who see successful women in STEM careers can overcome the stereotypes sometimes associated with these jobs. 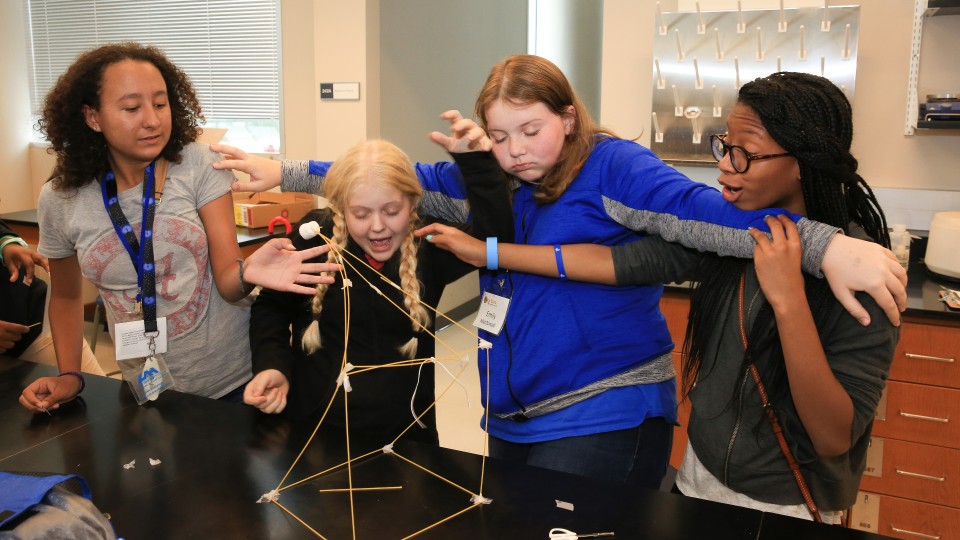 “What I’ve seen as an engineering professor is that we actually had a higher percentage of women in engineering when I started in the 90s than we do here in 2022,” Dr. Gaede notes. “We have a lot of complex problems to solve in today’s world, and we need all hands on deck. We need all of our talent! Also, the percentage of families headed by women has increased, and a job with a good wage helps everyone to move forward. In some cases, we are just making people aware of what their options are. We are so fortunate to have a wealth of opportunities here in Huntsville.”

To keep the cost of the camp to a modest $50 per person, Tech Trek relies on the support of sponsors.

“A program like this used to cost $800 dollars,” Dr. Gaede says. “The idea was to keep it to a minimum contribution that the family makes. Our sponsors vary quite a bit from year to year. PPG has been with us a long time, as well as Women in Defense. This year we also have support from Northrop Grumman, the Alabama Space Grant Consortium and the UAH office of Diversity, Equity and Inclusion.

“Without the Huntsville branch of AAUW, the program never would have gotten started. They initiated the camp and have been with us every step of the way. STEM hadn’t quite exploded back then in the same way it has now. They feel like they’ve kind of planted the seeds. We are using Toyota Foundation money for marketing and communications to spread the good word about Tech Trek. We are also having a camp where we bring teachers on campus at no cost and equip them with things they can take back to their schools for STEM enrichment.”

Finest Net Internet hosting for June 2022, In accordance To Consultants

Wed Jun 22 , 2022
Editorial Independence We need to assist you make extra knowledgeable choices. Some hyperlinks to merchandise on this web page will take you to a associate web site and will lead to us incomes a referral fee. For extra info, see How We Make Cash. If you wish to earn cash […]